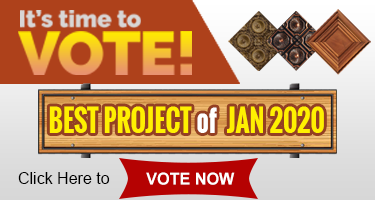 The History of Art Deco in Architecture and Decor

Think of historic and grandiose structures from the early 20th century and Art Deco buildings and skyscrapers are likely to come to mind. The Art Deco period lasted from 1925 through 1940. It was a style that strove to accomplish a number of things, such as portraying an image of strength and hope for the future, touching on and referencing past civilizations, and acknowledging and even embracing the new technologies of its time. It came into prominence after World War I during a time of much hardship for many and success for few. In addition to the buildings and skyscrapers, many of which still stand today, the influence of Art Deco also touched nearly every aspect of living during that period and shaped a generation.

The origins of Art Deco can be traced back to the early 1920s. It first emerged in Europe following World War I in areas such as Paris that were known for their many contributions to design. In 1922, during a competition among architects competing for the right to design the building that would be the new headquarters for the Chicago Tribune, a Finnish architect by the name of Eliel Saarinen submitted a design with Art Deco elements. The design was one of interest to many of the architects, and although it did not win first place in the competition, it did serve an important purpose in history, as it introduced the Art Deco style to American architects. As a result, the winner of the competition, architect Raymond Hood, was inspired by and used elements from Saarinen's designs to complete another bid that he would later win. This was a bid for the American Radiator Building, which he would build in 1924 and which would be considered the first Art Deco skyscraper built in the U.S. The story of Art Deco's origin, however, is most often traced to the Exposition des Arts Decoratifs et Industrials. This was an art exposition that took place in 1925 Paris that displayed design styles and theories from around the world. It is the name of this exposition from which the term "Art Deco" would be coined years later, in the 1960s. At the time of the exposition, however, the U.S. had little faith in its architects' ability to contribute something new and innovative. As a result, the government did not allow U.S. architects to enter the exposition. Those who did attend the event, however, were greatly inspired by Art Deco, and the flame of American creativity was lit.

The Art Deco style was a combination of new and old. It differed greatly from the Art Nouveau style, which was soft and organic. Instead, Art Deco took aspects of various styles, including Modernism, Futurism, Neoclassical, Cubism, and Constructivism, to name a few. Following the exposition, it began to appear on Hollywood sets. As a symbol of Hollywood glamor and style, it quickly gained in popularity both in the U.S. and internationally. Following World War II, Art Deco began to experience a decline in popularity as styles became more toned down. Although its time had come to an end, it was not forgotten. Interest in the style would re-emerge in the 1960s when a book was written by Bevis Hillier. It would also influence future design and design concepts.

Art Deco has distinct characteristics that make it easily recognized among other styles. Characteristics that are commonly associated with Art Deco include color, nationalism, zig-zag lines, iconography, metal work, mythology, geometry, sculpture and relief, botany, and murals. In terms of color, buildings could range from using pastels to shades of gold or vivid, glossy colors. Colors were often contrasting and could be either on the interior or the exterior of the building. Artworks inspired by Art Deco also took advantage of the range of colors, from mute to bright. Art Deco buildings were also a way for a business to showcase its nationalism. For example, in the U.S., some buildings featured prominent sculptures of eagles worked into the design. In addition to or in place of these nationalistic elements, some buildings used ornamentation that referenced mythology, particularly Egyptian mythology. Some buildings, skyscrapers in particular, often had a ziggurat or stepped profile and corners that were rounded. This rounded feature of Art Deco design is most easily recognized in vehicles, as it made planes, trains, ships, and automobiles more aerodynamic and sleek in appearance. Glass is yet another characteristic that is associated with the style. Glass was used in the form of etched glass and glass blocks which would replace bricks in some designs. Buildings other than skyscrapers were streamlined and had flat roofs. Geometric forms were also utilized in Art Deco designs. New or modern materials were an important element in this style. These materials include jade, linoleum, steel, plastics, chrome, and Bakelite. Metal was a perfect representation of what Art Deco strove to represent, which was strength and industrial might.

Art Deco in Other Media

Architecture wasn't the only thing in which Art Deco was used. In fact, it can be found in a wide range of media, from furniture to flatware. Art Deco-inspired furniture pieces were often stepped in form, similar to the skyscrapers of the same style. Art Deco also could be found in tableware, flatware, and refrigerators. Cars such as the Studebaker Commander, air transportation, and trains were also being designed in Art Deco styling. One could even see this style applied to office design, even pencil sharpeners. The influence of Art Deco can also be found in artwork, particularly posters, and in jewelry pieces.

There are numerous famous architects and artists who were influential and even famous when it came to this type of art style. Cedric Gibbons was a Hollywood set designer who had attended the Paris exhibition in 1925. He was pivotal in creating the Hollywood glamor of the time when he returned newly inspired and began using Art Deco on Hollywood sets. William Van Allen is the architect behind the Chrysler Building, while architect Donald Deskey was known for Radio City Music Hall. Edward McKnight Kauffer was an American expatriate and artist living in Europe during the 1920s and 1930s. His advertising posters embodied the style and garnered him many honors in Europe. Another Art Deco artist, A.M. Cassandre, was a poster artist whose work famously reflected Art Deco style. He is widely known for his poster "Normandie" of the ship SS Normandie. Many of his works also showcased other forms of modern transportation, such as trains, for example. Paul Poiret was an early Art Deco pioneer in the fashion industry and was influential in bringing Art Deco to that industry. René Lalique was a jewelry designer known for his Art Deco designs. Other artists working in this style included furniture designer Jacques Ruhlmann, Jean Puiforcat, who worked with silver, and Jean Dunand, who was known for lacquer work.

Some of the most recognizable and famous buildings are Art Deco. Many of the skyscrapers can be found in New York. In New York City, there is the Chrysler Building, completed in 1930, the Empire State Building, built in 1931, Radio City Music Hall, built in 1932, and Rockefeller Center, built in 1935. Art Deco buildings in Chicago include the Civic Opera House, built in 1929, and the Chicago Merchandise Mart. In Wisconsin the Wisconsin Gas Building is an example of Art Deco built in 1929-1930. The SS Normandie is also a famous example of this style. It was a luxury liner with an interior decorated in Art Deco style.

Today, Art Deco is a design style that is firmly in the past, although it continues to capture the attention and imagination of people today. Most often, it is studied and collected by those who are fascinated with the 1920s and '30s and their style. People may collect posters, jewelry, china, or furniture. Replicas of Art Deco items such as prints and jewelry are also available.