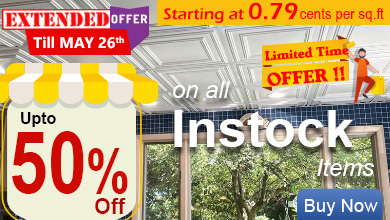 When you begin to conceptualize the decorative elements that you can add to your home, a ceiling medallion is probably not among the multitudinous ideas that run through your mind. However, installing a ceiling light medallion provides an elegant and legitimate way of improving the look of any room by providing a decorative ceiling. Their installation is inexpensive and you have a vast number of medallion designs to pick from. In this article, we explain exactly what ceiling medallion moldings are and provide a guide on how to buy them.

What Are Ceiling Medallions?

A ceiling medallion is simply an ornamental decorative item, often circular in shape, which people use to dress up their ceilings. These decorative ceiling moldings were very popular among the middle and upper-class homes in the 19th century. Back then, these medallions were designed using wood, plaster of Paris and papier-mâché. Of the three materials, papier-mâché was the most common.

Essential Features to Look for when Buying a Ceiling Medallion

It’s important that you choose the right size of medallion. You shouldn’t go for ceiling moldings that so small to the extent that it goes unnoticed. On the other hand, it needs not be too big that it becomes an eyesore.

The majority of homeowners use these ceiling medallions to accent a lighting fixture or fan, which are the focal points of a room. Picking a right-sized ceiling medallion will depend on the size of your room.

So, before you rush to the store to buy a medallion, first determine the size of your room using these steps:

Generally, differently-sized rooms will require different ceiling medallions. Here is a simple guide: A room with a square footage of:

These are just the standard guidelines. However, you are free to choose a much smaller medallion if that is what you prefer.

Once you know what size your ceiling medallion should be, you can start narrowing down your options based on their designs. The most common ceiling medallion designs are Rochelle, Jefferson, Chelsea, Renaissance,and Egg & Dart.

Again, your choice of ceiling medallion boils down to your tastes and preferences. Thus, you can choose modern styles that often come with historic patterns, floral shapes, curves, and more.

The material that you choose will be based on the installation process. The majority of ceiling medallions are made of plastic, which is a lightweight material. However, you can also find metallic ones or medallions made of hand-carved wood. When it comes to the installation, determine how much time you want to spend installing the medallion. Heavier medallions will be harder to install and they’ll take a while to adhere to the ceiling. You may be forced to use more screw to hold it firmly in place.

If you are a do-it-yourself enthusiast, then you can install the ceiling medallion by yourself. The other option is to hire a professional. If you have a fear of climbing ladders or don’t want to interfere with your lighting system, then you should consider hiring an expert. But if you have some experience in this area, then you just need to follow the right steps to install the ceiling medallion correctly. Some of the items you’ll need include:

One way to decorate your room on a budget is to invest in a ceiling medallion. These decorative elements are cheap yet they bring significant impacts to the rooms where they are installed. In addition to improving the look of a room, ceiling medallions can also help to hide flaws. Plus, they’re easy to install if you follow the right steps.